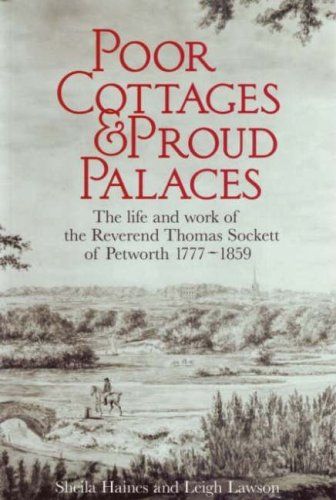 Poor Cottages and Proud Palaces: The Life and Work of the Reverend Thomas Sockett of Petworth 1777 -- 1859
by Sheila Haines and Leigh Lawson

… “a fascinating biography of someone who lived during a period of great change in our countryside where he played such an active role”
Julia Rutter, Sussex Family Historian, Vol 17 No 8 (2007)

… “Poor Cottages & Proud Palaces is clearly destined to be a classic”.
Peter Jerrome, The Petworth Society Magazine No 131 March 2008

… “Haines and Lawson have done an excellent job in teasing out the details of Sockett’s life and family. They have delved deep into the Petworth House Archives, and through a study of Sockett’s own papers have produced a fascinating insight into the life of the 3rd Earl’s family and household at Petworth House.... There is also much about Sockett’s own two wives and children, and the Canadian connection. For anyone interested in the history of Petworth and the 3rd Earl of Egremont, this book is a MUST. It is well indexed, with many illustrations and a summary of all the individuals mentioned. I couldn’t put it down!”
Richard Smith, The Petworth Society Magazine No 131 March 2008

Poor Cottages & Proud Palaces is listed with a synopsis on the Hastings Press website, with details for the Canadian distributor. It is also available online from Amazon.co.uk, and Amazon.ca

Thomas Sockett, 1777-1859, conceived and administered the Petworth emigration scheme and sent nearly 2000 emigrants to Ontario – most of them from Sussex. In younger days, he mixed with poets, artists and French émigrés and tutored the sons of the third earl of Egremont. His own son emigrated in 1833, and all of Sockett’s 12 grandchildren were born in Canada.

A PAGE FROM SOCKETT’S JOURNAL, OCTOBER 1805
Sat 5 Went in a boat to Wiggonholt & brought back 4 plants of Butomey [Butomus] which I planted in the Pond – retd at 9.
Sunday 6 In consequence of the Inspection having been fixed for old Mich[aelmas] day & the farmers having all represented on Saturday how inconvenient & almost impossible it would be for them to attend a circumstance I was not aware of till Taylor came and mentioned it to me while dressing in the morning as soon as I had breakfasted I set off to Chichester saw Coll Lyon & got the day post-poned – got back at 5.
Monday 7 – Tuesday 8 The Quarter Sessions.
Wednesday 9 – went a hunting on the Downs.
Thursday 10 Played at Tennis with Mitford – beat him.
Friday 11 – Went hunting about 1 on the Commons.
Saty 12
Sunday 13 I have not been particular in my account of the last 5 or 6 days as I had neglected to fill them up at the time but tho I have been a good deal from home yet I have not been quite idle. I have finished the Orestes read the introd. to Æschines agt Clesippa and arranged a number of my plants-
This evening arrived to dinner the D de Bourbon, Comte de Vaudreuil, Comte de Rouillie, Comtesse de Rouillie daughter of the D de B.
Monday 14 Read with H [Henry Wyndham] part of Taylor’s Preface to Æschines Oration agt Ctes Mr Biddulph lent me Dix’s Method of drawing Maps which I looked over - played at tennis with Carleton he beat me 4 sets out of 6 hardly played – arrived to dinner Ld and Lady Piercival and M de Quesne a Gentleman attending the D de Bourbon Comtess de Vaudreuil
Tuesday 15 Read the Introd to Æsch with Henry – Troop met at 2 1/2. I drew in the morning having begun to copy a drawing lent me by Miss Mitford – arrived to dinner the D de Berry, M de Polygnac & M de Menars
Wednesday 16 Read Bellum Catalinarium with H[enry] went a hunting at 12. The D de Bourbon, M de Rouillie, M de Quesnoit and Mdam Rouillie were out. Mdame rode the Major’s horse who was also there – did not read in the evening for they dine so late & I staid down stairs seeing them play at Billiards.